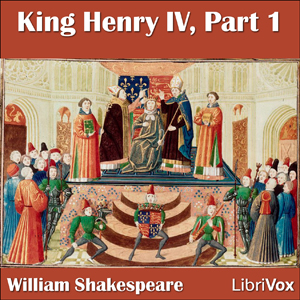 King Henry IV, Part 1 is the second of Shakespeare’s eight Wars of the Roses history plays, with events following those of King Richard II. As the play opens, King Henry IV (formerly Henry Bolingbroke) and Henry Percy (Hotspur) argue over the disposition of prisoners from the Battle of Holmedon. The King’s attitude toward Mortimer and the Percy family prompts them to plot rebellion. In the meantime, his son Prince Hal is living the low life in the company of Sir John Falstaff. As the time of battle nears, Prince Hal joins his father and is given a high command. The play’s climax is the Battle of Shrewsbury, in which Prince Hal and Hotspur meet and fight, with Prince Hal and the forces of the King prevailing. The action continues in King Henry IV, Part 2. From the start this has been an extremely popular play both with the public and with critics. (Summary by Laurie Anne Walden and Wikipedia)

Reviewer: PlanetPeace - favoritefavoritefavorite - March 12, 2013
Subject: Understanding dialogue of Shakespeare
Reading/comprehending the text of Shakespeare can be daunting at times if your not sure of your speakers character and/or repartee with another. Such words as Capon {pron. Cape-on, as in fowl}...(not Cap-On)or the word Sirrah for Sir, I'm not trying to sound as if I'm the expert, but I know enough of the text for my ears to hurt when I hear such faux paz. I can almost assure some of the readers here have never seen this particular history play and it's not their fault.

Maybe do a bit of research online for "Explanatory Notes" in order to capture the essence and tongue of the speaker(s).

May I suggest shakespeare-online.com There you may find the hurley-burley and hugger-mugger of much learned details.

Reviewer: uriel81 - favoritefavoritefavorite - March 7, 2009
Subject: OK, a little stiff but has multiple actors
"So shaken as we are, so wan with care". It's a-k.